As of r1666 the trunk version of AmbientTalk has support for generating a trace log of sent and received asynchronous messages between objects. This trace log can then be used for e.g. analysis or debugging. AmbientTalk's trace log format is based on that of Waterken and can be visualized in the Causeway distributed debugger. This is a tremendously useful utility for analyzing a message-based distributed application.

Causeway is a "post-mortem" distributed debugger. It works based on log files that are generated by an application as it executes. The log files basically contain events of interest (such as sent and received messages between actors), and Causeway provides you with a UI in which you can easily browse those events. See the following youtube movie for an overview:

Need more detail? Read the tech report (also useful if you want to know more about how Causeway works).

How do I enable tracing in AmbientTalk?

Tracing is supported by the /.at.support.tracer module. To load the module, execute:

Note that the tracer module is actually a function. To instantiate the module, you call the function, passing it a human-readable name describing the actor you will be tracing, and a directory path to where the log file should be saved. In this case, a log file /tmp/actorName.json will be created.

Sometimes, you may only want to trace part of your application. In that case, the following trace: construct exported by the module is useful:

The trace: construct activates tracing only during the execution of the block. If the block returns a future, tracing is only deactivated when the future becomes resolved (this is similar to the behaviour of AmbientTalk's dynamic variables). The trace: construct is most useful for scoping asynchronously sent messages. Unless the closure passed to trace: returns a future, trace: is not useful for tracing asynchronously received messages of objects. If, while executing the closure, a message M is sent asynchronously, and then the closure returns (without returning a future), tracing will have been disabled by the time the reply to M arrives. AmbientTalk's event loop model only dispatches received messages to their recipient objects when the runtime stack is empty.

An easy way to enable continuous actor tracing in a new actor from the moment it is created can be achieved by executing:

Finally, trace events can be emitted explicitly by invoking the appropriate methods on the Tracer. The best use case for this is the generation of comment events. To generate a comment, invoke Tracer.comment("any text").

For a concrete use of the tracer, have a look at the example in the next section.

For more information about the tracer, it is best to look at its implementation in atlib/at/support/tracer.at It's worth noting that the tracer is built completely on top of AmbientTalk's reflective actor API. The interpreter itself was not modified to enable tracing (it was modified to enable tracking line and column info of source code, and a logfile writer was added that outputs the log in JSON format).

Consider a shopping application that needs to process purchase orders. Before the shop can acknowledge the order, it must verify three things: 1) whether the requested items are still in stock, 2) whether the customer has provided valid payment information and 3) whether a shipper is available to ship the order in time. The above example is available as a demo in AmbientTalk. Let's review the code. In total, four different actors are created. The first one is the "buyer" process, which must process order purchases:

First, notice that tracing was enabled for this actor as indicated previously. Second, the buyer process responds to a message named go that, given references to the appropriate (remote) objects, sends out the appropriate messages to inventory, creditBureau and shipper objects. Dummy arguments are provided. To keep this example simple, we don't make use of futures. Instead, the buyer makes use of an "AsyncAnd" abstraction. An AsyncAnd object is created by invoking makeAsyncAnd(n, callback) where n is a number indicating how many affirmative replies the AsyncAnd object should receive before it invokes callback<-run(true).The callback is an object that responds to the message run(boolean). If the "AsyncAnd" receives a negative reply, it will immediately invoke callback<-run(false). Here is the code for makeAsyncAnd:

Notice the two calls to T.comment in the above code. T.comment(string) logs any string for inspection in Causeway. However, the format used in these comments, namely "happened: event" and "leadsto: event" have a special meaning for Causeway. A "leadsto: event" comment emitted by a method as a result of receiving a message m indicates that reception of the message m leads to a certain "event". Eventually, when the "event" happens, this is logged using the "happened: event" comment. Causeway will visually indicate the causal relationship that exists between the "leadsto: event" and the "happened: event" messages. Note that the event logged by those messages should be unique. If two "happened: X" strings are generated within the same application, Causeway will raise an "Happening conflict warning" message.

The rest of the example simply consists of the defintion of a number of ancillary processes (modelled as actors) that respond to the different messages. For simplicity, all three processes simply send an affirmative reply to the "AsyncAnd" callback.

Since no further messages need to be traced in these processes once they sent their reply, they close their trace log by invoking T.close().

Finally, the example is put in motion by sending the go message to the buyer process:

Running this example should print the following to the console: > Got answer: true As a side-effect of running the example, you should see the files buyer.json, product.json, account.json and shipper.json in your home directory. To inspect the trace logs, launch Causeway:

Which should show you something similar to: 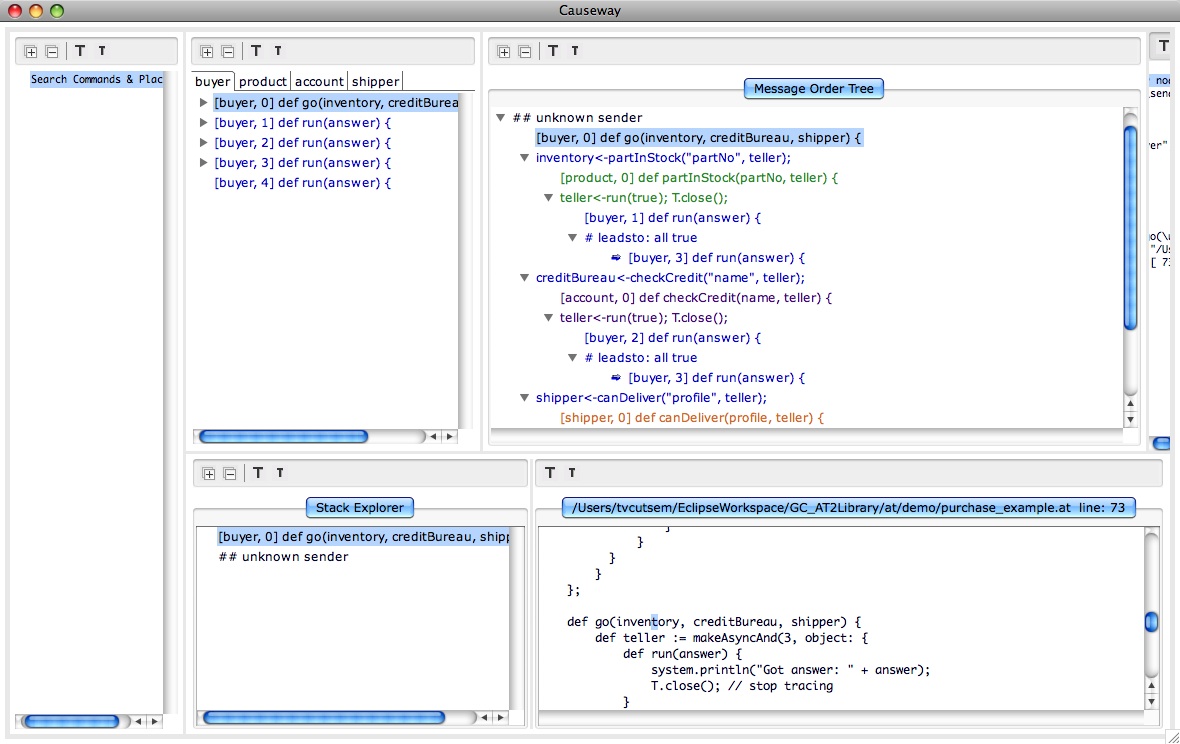 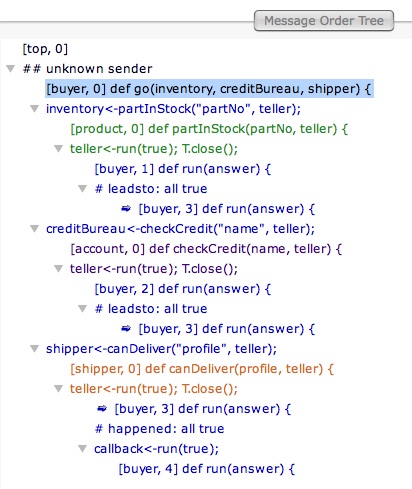 Notice the little "=>" arrows next to the [def run(answer) messages. Clicking on any of the messages tagged by the "=>" arrow immediately makes the selection jump to the last of these. The "=>" arrows denote that these messages lead to a certain other message. In other words, they visually represent the "leadsto:" and "happened:" events from the example.

The upper right pane allows you to select a logged actor (note that each actor gets assigned its own color). In the screenshot below, I selected the "product" actor. It shows that the "product" actor received one message named partInStock and, in response to receiving that message, it sent another message teller<-run(true) to the AsyncAnd teller: 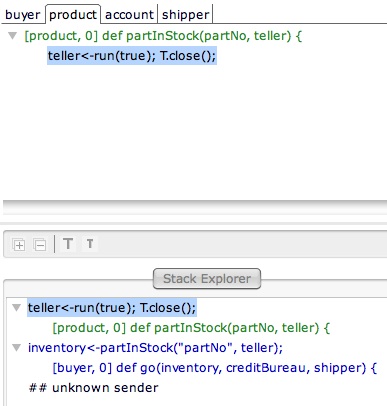 Also take some time to explore some of Causeway's options. One useful option for bigger examples is filtering: select Tools then Set Filter Options. It will show you a list of all the traced source files. You can deselect some source files, which will hide all the messages sent by or received from code in those source files.

Great! Now how do I install Causeway?

Causeway is written in the http://www.erights.org E programming language. To run Causeway, you will need to download and install E or, to get the latest version, simply execute:

Then, cd e/src and make to build the E interpreter. This should create an ../export/dist directory in which you can find a README.txt file with further instructions on how to get E up and running. In principle, it suffices to do:

Causeway is available under export/dist/scripts/causeway.e-swt To run it, it's best to add the export/dist directory to your $PATH, allowing you to run rune (E's command-line interpreter). Then start causeway as follows:

As Causeway requires a lot of memory, try the following if you run out of stack/heap space:

Finally, if you encounter problems and think causeway may be misinterpreting some of the events, passing the following flag will show an additional panel indicating the JSON source of a parsed event:

Causeway uses SWT to render its GUI. SWT is a Java widget toolkit that is platform-independent but that uses native widgets to render the GUI. Normally, E should include a version of the SWT GUI library that should work under all major OSes.

Support for futures and custom logging

As of r1781 the tracer supports logging of futures and when:becomes:-observers. The future-based version of the above "purchase example" can be found here.

The tracing module exports a number of type tags that can be used to do custom logging of events. For example, to disable logging of an async message:

Messages can also be annotated with custom logging behavior, as follows:

However, this is an expert feature and should be used only on special "meta-messages" that should not end up in a Causeway trace log as regular "application level" messages.