Elisa Gonzalez Boix Apr 13, 2018
Page history
This is an old version of this page. You can view the most recent version or browse the history.

AmbientTalk is a research platform to experiment with new language features or programming abstractions to facilitate the construction of software that has to run in highly volatile networks exhibiting intermittent connectivity and little infrastructure.

The language's concurrency features are founded on the actor model and have been largely influenced by the E programming language. The language's object-oriented features find their influence in languages like Smalltalk (i.e. block closures, keyworded messages) and Self (prototype-based programming, delegation). Finally, the language has a functional core, inspired by Scheme and Pico.

AmbientTalk's main differences with mainstream languages are that:

We recommend using our Intellij IDEA plugin which already contains the AmbientTalk distribution. You can also download the AmbientTalk interpreter and use the TextMate bundle or Emacs mode.

AmbientTalk runs on J2SE, J2ME under the connected device configuration (CDC), and Android Platform. Our Android application for AmbientTalk is available on the Android Market, but you can also download it in the downloads section.

AmbientTalk is actively used as a research tool: it is extended with new language features, either dedicated to further facilitate the development of software for ad hoc networks, or to explore the suitability of the language in new domains. Examples of such features include: - Ambient references supporting different anycast and multicast messaging strategies - Reactive programming - Tuple space-based abstractions - Leasing to clean up resources - Interacting with RFID tags as plain software objects - virtual network layers and inter-network communication - ...

In this screencast on the AmbientTalk programming language, we show how to implement a simple echo service for mobile ad hoc networks. We introduce AmbientTalk's support for peer-to-peer service discovery, asynchronous messages, futures and how remote object references are resilient to network failures by default. 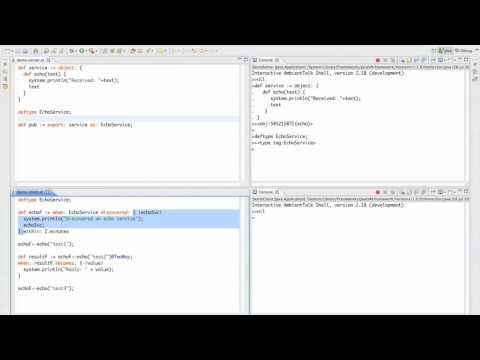